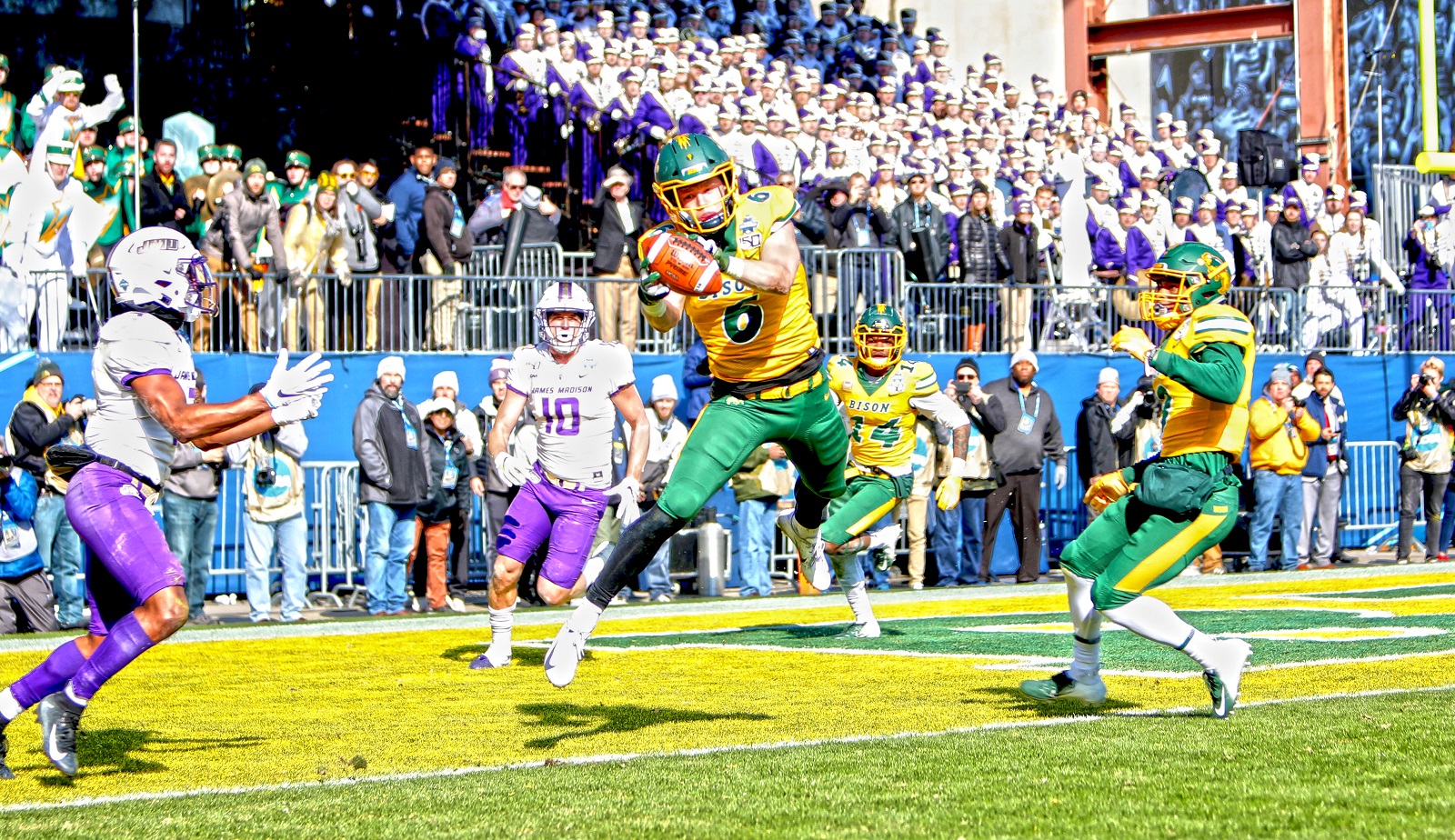 An interception in the end zone preserved North Dakota State’s eighth FCS title in the last nine seasons. The Bison won 28-20 over James Madison to cap an undefeated 16-0 season.

The game began with JMU receiving the kickoff and proceeding to drive down the field for a touchdown. Ben DiNucci found Riley Stapleton for a 5 yard touchdown pass as Stapleton fought his way to put the ball past the goal line. The opening drive took seven and a half minutes.

The lead did not last long as some Trey Lance magic on third and long put the Bison in JMU territory. The drive culminated in a touchdown run by Adam Cofield and the game was tied at 7 thanks to a four minute drive by the Bison.

NDSU forced a punt and made quick work of their second drive. They only needed four plays to take a 14-7 lead capped off by Phoenix Sproles‘ 38 yard touchdown run on a gadget play.

The Dukes were able to respond with a field goal to cut the deficit to 14-10. NDSU then began a long drive from inside their 20 yard line. JMU appeared to have kept the Bison to a field goal, but the Bison surprised them with a fake field goal attempt that went for a 20 yard touchdown from James Hendricks.

James Madison attempted to get some momentum to end the half, but Ethan Ratke’s 39 yard attempt hit the upright and landed in the end zone. North Dakota State would take a 21-10 lead into the halftime intermission.

James Madison’s defense stepped up to begin the second half as they stopped the Bison on their first two drives and held them to just 15 yards. The Dukes were able to connect on a field goal to make it a 21-13 game midway through the third quarter.

The Bison’s third drive of the half resulted in another Lance Trey highlight. This time he stepped up in the pocket, saw daylight, and turned on the jets for a 44 yard touchdown run. The Bison went up 28-13 early in the fourth quarter.

The Dukes were not done as they were able to take their second drive of the fourth quarter to the Bison’s 5 yard line. For the second time in the game, DiNucci found Stapleton for a 5 yard touchdown pass to close the deficit to 28-20 with less than 7 minutes remaining.

James Madison had one final attempt to tie the game. With less than three minutes remaining in the game, they began a slow, but methodical drive to the Bison’s end zone. A 22 yard pass from DiNucci to Stapleton put the Dukes in the red zone. A pass interference by NDSU put JMU on the three yard line when James Hendricks made yet another play.

Trey Lance was named the Most Outstanding Player in the 2020 FCS Championship in addition to being named the Walter Payton Award winner earlier in the month. He only went 6 of 10 for 72 yards through the air, but his ability to keep plays alive with his feet were on display. Lance had 30 carries for 166 yards and a touchdown.

With the win the Bison completed a 16-0 season, the first since Yale achieved the same record in 1894! Here are some other accomplishments from the Bison.