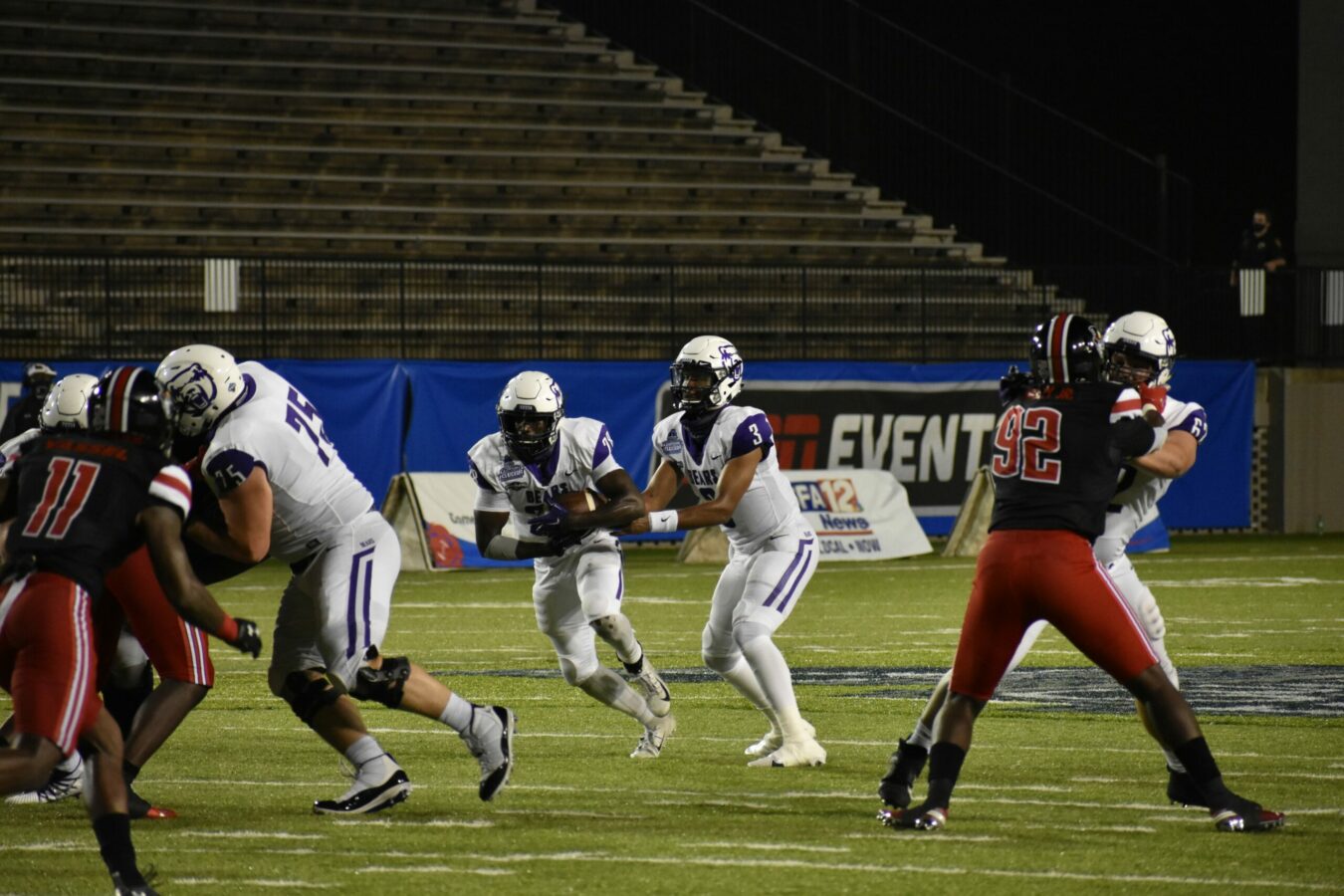 The 2020 college football season has started after a tumultuous offseason with Austin Peay and Central Arkansas meeting in the FCS Kickoff Classic.

And what a way to start the season it was.

The game started and ended in a similar fashion with offensive fireworks. What occurred between left a lot to be desired as Central Arkansas came away with the 24-17 victory and spoiled Marquase Lovings‘ head coaching debut.

All 18 fourth-quarter points were scored in the final 7:44 and the lead changing hands twice in the final two minutes. The teams combined for five turnovers and 15 penalties.

Breylin Smith struggled at times during the game as he went 26 of 49 for 283 yards with a touchdown and two interceptions. However, he showed up when it mattered the most including the touchdown that proved to be the difference. Kierre Crossley had 12 carries for 110 yards and a score while Cameron Myers had 76 yards on 13 carries.

C.J. Evans ran for 98 yards on 10 carries with 75 and a touchdown coming from the first play of the game for Austin Peay. Jeremiah Oatsvall finished the game with 181 yards and an interception on 14 of 31 passing. He also added 37 yards and a score on 12 rushes.

It did not take long for the scoring to commence though the explosiveness became rare until the final few minutes of the game.

Austin Peay scored on the first play from scrimmage as C.J. Evans took the pitch 75 yards to the house to give the Governors a 7-0 lead just 16 seconds into the contest.

The Austin Peay defense made a statement in the first quarter by stopping Central Arkansas not once but twice on fourth down while the offense converted a fourth down of its own.

Central Arkansas had another sustained drive and this time was able to get points on the board with a 30-yard field goal by Hayden Ray.

Austin Peay’s third bad snap of the game – yes, third in the first half alone – would cost them as they gave the ball to the Bears at the 11-yard line. The defense stepped up and held Central Arkansas to another field goal, this one from 26 yards. The Governors turned to their quarterback to pooch kick punts for the rest of the game.

The first half ended with both teams turning the ball over. Jeremiah Oatsvall slipped as he made a pitch and Central Arkansas recovered at the 27-yard line. On the next play, the Bears’ Breylin Smith threw a pick in the end zone to give it back to Austin Peay. The Governors took a 10-6 lead into the halftime break.

Central Arkansas wasted no time in taking its first lead of the game in the second half. They marched down the field in a minute with Kierre Crossley running for all 56 yards on the drive including the touchdown to make it 13-10.

The remainder of the third quarter featured the defenses zoning in and making life tough for the opposing offense. There was another Central Arkansas turnover on a pitch to the running back but nothing came of it for Austin Peay’s offense.

Central Arkansas clung to a 13-10 lead for the early part of the fourth quarter. They were able to extend their lead to 16-10 midway through the quarter thanks to a 32-yard field goal from Ray, which was his third of the game.

Austin Peay hit a 43-yard pass from Oatsvall to Jay Parker to get inside the red zone late in the fourth quarter. A pass interference call on fourth down gave the Governors the ball at the two-yard line and Austin Peay punched it in on a QB keeper from Oatsvall to take a 17-16 lead.

Central Arkansas had an answer as they drove down the field to get inside the red zone. A 29-yard pass by Breylin Smith to Tyler Hudson put the Bears in prime position to get a field goal. However, the Bears wanted more and got it as Smith threw a touchdown pass to the corner and Lujuan Winningham for the score. A two-point conversion from Smith to Sam Camargo made it 24-17.

Austin Peay had one last chance to tie the game. After driving to the Central Arkansas 45, they faced a fourth and ten, which was converted by Oatsvall scrambling for 18 yards and leaving two seconds on the clock. Oatsvall’s hail mary to end the game was intercepted by Tamaurian Wilson to seal the win.

The college football season continues next week with Central Arkansas making another appearance on Thursday at UAB. South Alabama will also play at Southern Miss on Thursday.

Austin Peay’s next game is at Pittsburgh on Saturday, September 12. FCS teams are scheduled to play four games next week.